The truth, and nothing but the truth!

Thanks Janet, Chiew & Fiona for your guesses on my Blog challenge: Truth or Lie? post.  Here I come clean and let you know the stories behind both the truths and the lies... 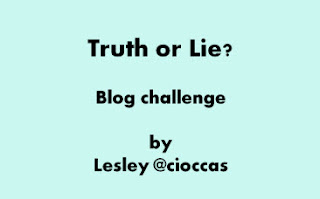 Number 1: I had a baby kangaroo as a pet when I was young. 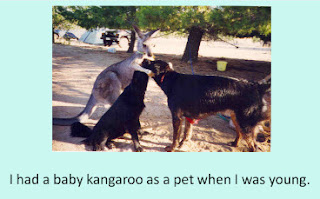 FALSE!
Well, this is a half-truth.  My father DID shot a kangaroo with a baby (joey) in its pouch!  He DID bring home the joey to our house in suburban Sydney, BUT I hadn't been born at that time.  I only have the photos of my sisters with the joey. Chiew, there probably wasn't a law against this 50 years ago, but there sure is now!
The photo above is of my dog Luca with a kangaroo on a farm in the country.  This kangaroo had grown up with the other dog in the photo so was unusually friendly to dogs. 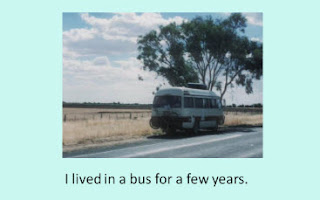 TRUE!
I DID live in the bus in the photo for a few years (though I did occasionally stop travelling and stay in a friends' house).  I travelled about 60,000 km altogether over the eastern half of Australia, and had the most wonderful time.  This photo was taken in country Victoria during a heat-wave summer!
See the video at the end of this post for a short video about this journey.


Number 3:  I was given an award for good driving. 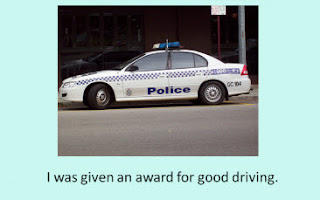 TRUE!
Quite a few years ago I was driving from Sydney to Canberra and, just outside a city called Goulburn which is notorious for Police patrols, I was followed for a while by a red car.  Then I was asked to pull over - I can't remember now if he used a siren, but he must have for me to know it was a Police car.  I was angry and immediately started to argue, but the friendly policeman just stopped me talking and smiled and said he wanted to give me an award for good driving because I had been doing everything right since he first spotted me!  He also gave me a few vouchers: for petrol, a ski pass, coffee at a local cafe, and more!  I've never met another person who has been pulled over for doing the right thing, so sometimes wonder myself if it really happened.


Number 4: I can speak PitjPitjantjatjara language. 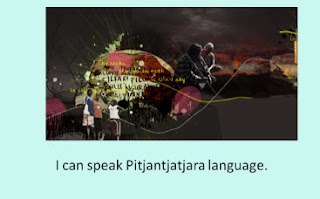 FALSE!
I DID sign up for the online Pitjantjatjara language and culture lessons on the Ninti Ngapartji website, but I never really learnt how to speak the language.  The website used to be 'subscription only' but the video lessons are all freely accessible online now if you'd like to take a look.  It is an amazing way to learn a little about Pitjantjatjara culture and language.
There were over 250 languages in Australia before the British came here and dominated with English, but only about 60 are considered 'live' languages (source: http://www.creativespirits.info/aboriginalculture/language/ )  There is an interactive Indigenous Language Map where you can see which part of Australia Pitjantjatjara is spoken and get a little more information about the different indigenous languages in Australia.


Number 5: I used to fly a paraglider. 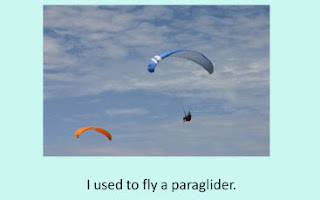 TRUE!
I DID get my pilot licence and fly a paraglider.  I learnt to fly in a small place south of Canberra called Michelago, and when I was travelling around in my bus I found quite a few places to fly and people to fly with, from the mountains to the sea!  I haven't flown for a few years, and have a paraglider for sale if anyone would like to make me an offer :-)  (BTW, that isn't me in the photo. I couldn't find any good photos of me flying).

I have thoroughly enjoyed reading all of the contributions to this challenge and hope you enjoyed mine too.

P.S. Doing this blog challenge has given me the courage to share a short video I made about my bus journey with my blog readers.  I made this as part of an excellent digital story workshop I did a few years ago - details at the end of the video.


Waving, Not Drowning
a digital story

Well, thanks for thinking I might have been able to speak Pitjantjatjara. :-) It wouldn't be a very useful language for me as I don't meet many Pitjantjatjara speakers in Canberra. The local indigenous language is Ngunnawal, but there aren't any courses in that, yet.

This has been a great challenge, Lesley! Thanks very much!

Wow! You are certainly very adventurous!! You have actually lived in a bus and gone travelling a fair amount, which is very exciting. Also the paragliding must have been an incredible experience. As for the good driving, that is an unbelievable story and very interesting.

I got these facts right on my 2nd guess, so maybe I didn't do too badly in the end :-)

Sorry I've come to this post too late to join in with the guessing but thanks for the contribution! The screencast is a great way of doing it (and helps to avoid the accusations shuffling and eye-shifting that came up in some of the the other posts!)

Thanks Janet and Dave.

Janet, travelling by bus/motorhome is a terrific way to see Australia. I had two dogs with me: Luca, who you've 'met' on video, and Ubu, a 3-legged lab. They helped me have even more adventures than if I'd been alone and also to meet more people.

Dave, Janet was the inspiration for the way I presented my challenge video, as she is in so many things! I couldn't have talked to a camera - you would have seen the lies on my face ^_^

I have just finished viewing your truly amazing video story "Waving not Drowning". What a story! What an adventure! What a life-changing experience!

You are a really intrepid explorer. You certainly followed your heart and your intuition to do what you wanted at that point in your life. That will stay with you forever!

Well done for having the courage to show it on your blog. Your video story really moved me. Kudos to you....

Hi Janet
Thanks for your thoughtful comment on my video.

As I mentioned on Twitter, it was very much an accidental adventure. In the beginning I was 'running from' rather than 'running to', and it felt very much like 'running away'! But, once I settled into it, intuition played a big part in every move I made. The experience helped me to learn to trust my intuition and instincts which have served me well ever since.

It was also a major turning point in that it created the conditions which made all my other big adventures possible, including those that led to me becoming an English teacher, recounted in brief in my latest post on my blog: http://cioccas.blogspot.com/2011/10/blog-challenge-whats-your-story.html

Thanks again, it's lovely having such special support and encouragement from across the world ^_^

Wow Leslie! Thank you for sharing your experience! That is a very powerful and inspiring video!
Well done you!

Thanks Annie!
I'd actually forgotten I posted the video there when I read your comment. Glad you found it inspiring.
I gather you've come here from the EVO Digital Tools course introductions? Look forward to learning there with you.
Regards, Lesley